I Do...from the other side of the world

Life is not measured by the number of breaths we take, but by the moments that take our breath away. - Hilary Cooper 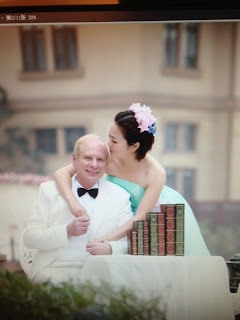 My dear friend, Jeff, emailed me out of blue one day saying that he would be flying out to China to meet his future wife.  I was in a world of confusion.  Firstly, I didn’t know Jeff was getting a divorce from his current marriage let alone going to marrying someone else and she is half way around the world for that matter.
Before I get ahead of myself, I want to tell you something about Jeff.  He is a gentle soul and always kind to others.  I met him through a professional organization we belonged to.  Jeff had two rough marriages and really God bless him for  never giving up on love.  All he ever wanted was to have someone to love him as much he wants to give his heart to completely.  I always think Jeff a Phoenix without the fiery presence; on the contrary, he instills calm and tenderness with his compassion for humanity and his longing to care for another.  His southern accent gives a touch of sadness sometimes.  Jeff went through some medical issues a couple of years ago and we have not communicated too frequently yet he was always in my thoughts and prayers.
When Jeff’s email came through with this good news, my logic side became quite animated and alarmed.  We had some intense discussion of his method of meeting someone through Internet.  My own cynicism didn’t allow positive feedback about letting computer make life changing decisions.  Jeff listened to my endless questions about his sound judgments patiently and told me that he would never know if he would find happiness if he didn’t keep trying.
Jeff was married this past month.  He texted me a few of his wedding photos, I saw the tenderness on his face and the ultimate happiness he showed.
When I look around, other than myself, there are several couples I know are in an interracial marriage. 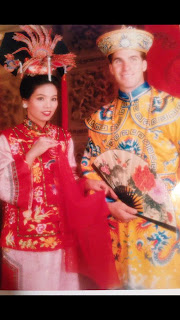 My childhood best friend, Remy, has been married to her down-to-earth brainy American husband, Courtney, for 20+ years. Remy and I went to the same church and we were very active in church activities.  She was always the hightlight in the groups and she shone with such glow all the time.  I still remember we used to lie down in one of the church’s resting bunks sharing our infatuation and crush secrets about the boys and giggled senselessly over our imaginations.  We would often try to figure and compare to whom we wanted to marry, “when” we grew up.  But I knew boys’ eyes were always on Remy – how could they not?  She was beautiful and sassy and always with a kind heart.  When I learned that she married Courtney, I was thrilled.  In my mind, I knew sooner or later, she would be moving to the states and I would have felt somewhat less isolated here.  These days we check out each other on FaceBook .  I am so proud of her for being a successful business woman!! 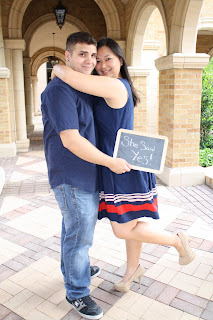 Sheila & Nathan
My niece married a young and adorable Nathan just this past year and they are such cute couple; Sheila reminds me when I was younger – daring and adventurous and very budget conscious!!  She also arms with her the traditional values of hard work which she proved by getting college scholarship while she attended college in Texas.  I am excited and happy to see their lives together unfold.
my cousin, Jasmine, married the scholarly-looking Gary. She has visited the states several times but just recently I found she actually had been with Gary for some time. They had a small traditional Chinese wedding in Taiwan where all the detailed and respectful rituals of bowing to the elders were carefully followed.  I know Jasmine’s heart hangs in two places; she longs to be here with Gary, yet the pull of her childhood place is just as strong .  I can’t wait until she moves here.
I look at all of us Asian women tying the knots with these western men, I know our moments in saying, “I do” were glorious and breath-taking!!  What was it  we saw in these men that made us give our hearts and souls to?  More importantly, what do these men see in Asian women to make the lifetime commitment?  Have they always wanted to marry Asian women or their vows were made deriving chance encounters? 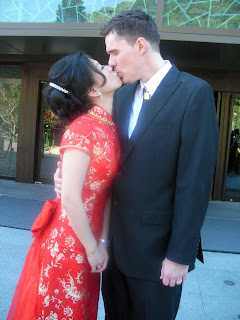